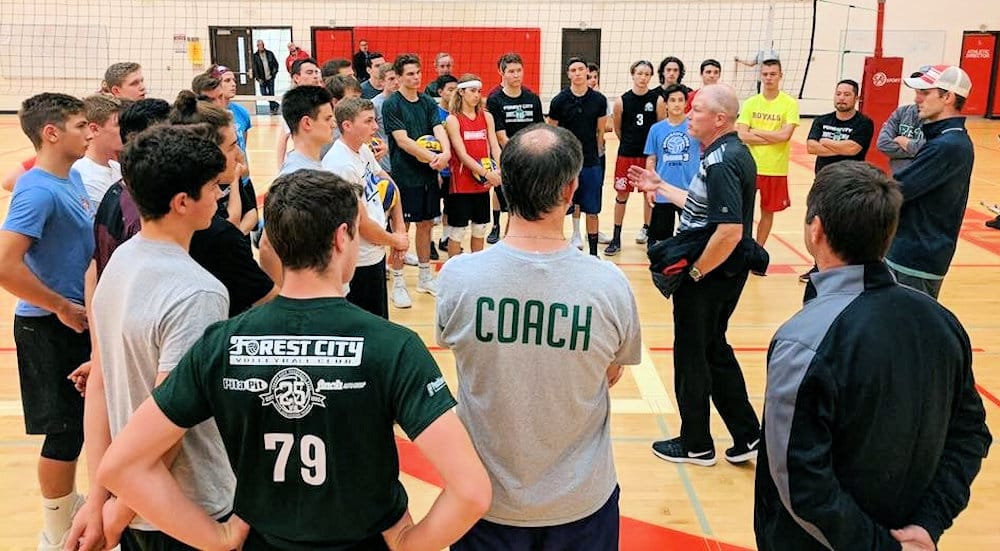 Head coach of the NCAA champion Ohio State Buckeyes, Pete Hanson, travelled to London to scout, recruit, and inspire the FCVC 16U, 17U and 18U boys during a recent practice session.  On their way to compete against the McMaster Marauders, the Buckeyes coach was impressed by the level of training and skill demonstrated.

FCVC and Ohio State alumnus, Mark Peckham, head coach of the FCVC Boys 17U - Green team, has known Coach Hanson for nearly 20 years.  He summarized his experience with the enormously successful Ohio State volleyball program below:

I first met Pete Hanson and his assistant Tim Embaugh, in the fall of 1998 when my college recruiting process began.  Pete has been the Head Coach at Ohio State for the past 33 seasons, and Coach Tim has been there for 27 seasons.  After a couple of meetings with the coaches, both in Columbus and here in London, I committed to The Ohio State University for enrollment in fall 2000.  My experience as a student athlete at OSU was nothing short of amazing, and I will treasure the relationships I made for the rest of my life. The past two seasons have been the most successful in the program's history, as Ohio State has repeated as NCAA National Champions.

I reached out to Coach Hanson to invite him to London on his way to his team's match against McMaster, to see some top local volleyball talent.  It didn’t take much convincing and Coach Hanson attended practice for our 16U, 17U and 18U boys and was very impressed with the level of play.  I’m looking forward to continued contact with the coaches and I’m sure we will see them again soon.  Go Buckeyes!

The coaching Mark received at OSU led to a stint with Team Canada, and FCVC is lucky to have the 6'5" former setter guiding the next generation of volleyball talent.  Along with current and former Team Canada members, TJ Sanders, Bryan Duquette, and Paul Duerden, FCVC has trained several volleyball stars and looks forward to continuing that tradition, as the longest-running and most-respected youth volleyball club in London.

Thanks to Coach Hanson and Coach Mark for continuing the tradition of paying it forward to the next generation.

The full match of the NCAA championship between Ohio State and BYU is available below: